Shiv is all of 3.5 years and he has an endearing list for us. His mum, Sreedevi is 32 years old and she has an adorable account of raising a reader. This report comes to you unedited, straight from the horse’s mouth and, his mum’s.

Like a lot of women out there, I started reading out aloud to my baby while I was pregnant. I read out exclusively from recipe books though, and would try to decide the menu for the next day based on how my baby kicked/ rolled about when I described the ingredients and the dish. It did not bother either of us that the menu ‘we’ picked out would generally be rejected by my mother (“What rocket leaves?! You get spinach, three times a day!”). Jr and I still enjoyed our daily read aloud sessions.

After an emergency procedure, Shiv entered this world considerably early. And like many premature kids, he took a long time to achieve his physical milestones. When his first birthday rolled around he couldn’t even crawl or sit properly, while a lot of children his age were already trying to walk. That was a particularly difficult period for my husband and I, when the paediatrician was concerned that our son may have neurological issues due to the complications of his birth. At that time, honestly, my biggest comfort was the fact that Shiv loved and responded well to stories. He had already begun pointing out his favorites from his little bookshelf and would very clearly indicate that he wanted to be read out to. And I would try to tell myself that all children are different – other kids play, my son reads. And everything is fine with the world.

Three years later he is a bright, happy boy who loves cars and his brand new bicycle. But his first love remains books, and his parents couldn’t be happier about it. So without further ado, here’s a review of ( a few of) his favorite books.

(He loves this book because it makes me shriek and gurgle like a maniac. It is one of my favorites too.)

Amma : Stop making noises and tell me why you like the book. Full sentence!

(He is fascinated by the illustrations in this adorable book. And I wonder whether he identifies with the reserved Iggy Peck.)

Amma : NO SHIV WILL NOT!

(He is absolutely crazy about cars, and has many books about talking automobiles. But this is the only one featuring a talking traffic light. Not in picture because it is with his grandparents.)

Shiv : Because Subbu is very important. And he helps everybody. He helps Athan go to the office.

(It has been described as “Dylan Thomas for infants.” I personally find the language rather complex (eg: the cat hunted for corners “as dark as dreams”). But the illustrations are gorgeous!)

Shiv : The pictures are full pretty-pretty. Paddiwack does not like Cosy first, but then they sleep together and become friends.

(He is at that age when underwear and other peoples’ private parts are incredibly fascinating. Also, this book has a boy named Shiva.)

(I got him this book when he was 2.5 and it was an instant hit. We have also printed out colouring sheets and activities related to this book from Chitra Sounder’s website.)

Shiv : Farmer Falgu dropped his eggs because he did not wear seatbelts when going in the bullock cart.

(He still loves looking at pictures of food, and is very keen on “helping” me out in the kitchen. So this book was an obvious choice)

Shiv : Because this boy is helping his Amma in the kitchen. Shiv also helps Amma. Even when she says No.

(It is a sweet story about creativity and learning to make art on your own. I love the way the author has typed out letters to make images of ships and houses and what not.)

Shiv : So many so many letters!

Amma : do you mean words?

Shiv : No no… letters! Photo write with letter! 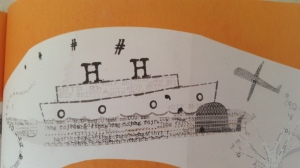 (A firm favorite in our household.)

Shiv : Boy dropped penguin in South Pole. But no other penguin there. So boy reversed boat, picked up penguin and came back.

(A funny, ridiculous story about how Albie tries to stop a bunch of penguins from making a rocket out of things stolen from his house. I bought it only because Shiv went through a phase where he only wanted to read about the moon and rockets. But he surprised me by falling madly in love with this book.)

Shiv : Naughty Penguins! And rocket seat made of potty seat!

(Many of his other picture books like Lost And Found, Penguin And Dragon, Penguin, Peek – A – Boo Penguins all feature well behaved penguins. Not this one!)

Thank you Shiv! This makes me want to add all these to my library. And thank you Sreedevi for an honest report and such a lovely account.